voters of Delhi have taught an unforgettable lesson to BJP 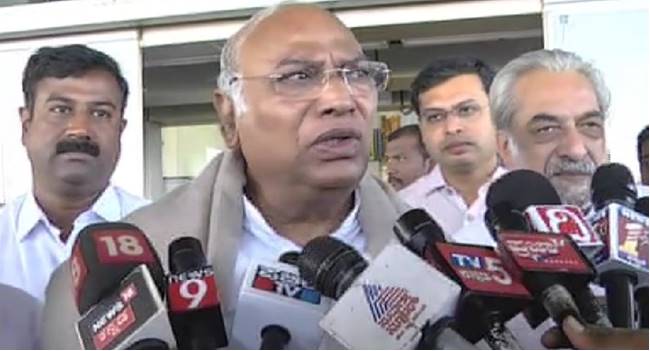 Share
Pragativahni News, Belagavi: Though his party suffered a never before humiliated defeat in Delhi election with Zero score, Congress senior leader Mallikarjun Kharge said Victory and Defeat are common in the election and competitors, but the voters of Delhi have taught an unforgettable lesson to BJP which fought the poll with its Hindutwa agenda.
Speaking to news persons at Sambra Airport on Thursday, Kharge said his party expected the result for which it was not serious, however, it’s intention of defeating the BJP was met. It may be recalled here another senior person from the party, former Union Finance Minister P Chidambaram, on Wednesday, also spoke on line of Kharge for which he was taken to task in social media from his own party members and supporters.
Kharge, who first time experienced the defeat in the last Lok Sabha election by his own party person who migrated to BJP said Article 371  providing job reservation to the backward Kalaburagi region, establishing Railway Workshop in Hyderabad Karnataka  was his contribution, however, the party with no agenda defeated him by false propoganda.
Kannada NewsMallikarjun KhargePragativahini News
You might also like More from author
Kannada News