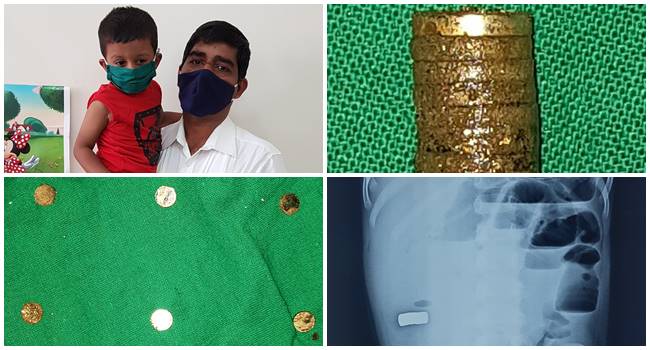 Pragativahini News, Belagavi –A two year old male child from neighbouring state of Goa was referred to Department of Paediatric Surgery of KLES Dr. Prabhakar Kore Hospital, Belagavi with complaints of abdominal pain, distension, vomiting and passing dark coloured stools. Amidst the lockdown due to COVID-19, a highly contagious disease at its peak with permission from Goan authorities the child was rushed to the hospital.

The child was attended by Dr. Santosh B. Kurbet, Paediatric Surgeon. History was noted and through examination of the child was done. The child was drowsy and was in shock. Necessary basic investigations and X-ray revealed suspicion of foreign body ingestion (swallowed) by child of which the parents were totally unaware.

Dr. Kurbet and team swung immediately into action within hours as the child’s health had already started deteriorating and emergency abdominal laparotomy surgical procedure was performed on the child, which was started in the midnight.  On surgery the child had 5 perforations (holes) across proximal jejunum (portion of small intestine) and distal jejunum, proximal ileum,  mid ileum and near ileo-ceacal junction.

One by one 12 small circular strong magnets which were attracted to each other and were attached in straight line were carefully removed. Entire bowel (intestine) was traced for magnets, the perforations (holes in intestine) were repaired at 3 sites and at another 2 sites required resection of ileal segments and anastomosis (re-joining of small intestine was performed as it was ruptured), one of them being near ileocaecal region, and the surgery lasted for 2 and half  hours and was ably helped by anaesthesiologist Dr Nikita Kalyanshetti.

The reason for perforation (damage) probably was accidental consumption of magnets one by one with a time gap, while playing which after reaching different parts of  bowel came towards each other, near enough for magnetic action and became attracted/attached with bowel wall between them.

After being there for a while they got through the bowel wall by ischemia and pressure necrosis leading to perforation which was contained by them being adherent on a straight line, as it was seen on plain x-ray in the right lower abdomen, which we could only think of retrospectively and is well explained in literature said Dr. Kurbet.

The scientific papers have reported similar incidents of accidental ingestion of 4-6 magnetic materials by children, in India. Perhaps, this is the first reported case wherein 12 magnetic toy buttons were ingested by a child and were successfully surgically removed.

Goan parents have expressed deep sense of satisfaction and gratitude over the outcome of the surgery and have thanked the surgeon and all staff of the hospital for saving the life of their little one amidst lock-down.

However the greatest moment of joy was when the child came back to the hospital with thankful parents for follow up and is doing fine, feeding well and has gained weight. Parents also revealed now after checking that magnets were the ones behind the A-to-Z alphabet toys, back home which they were totally unaware of.  Paediatric surgeon                  Dr Santosh B. Kurbet cautioned the parents not to leave the children unattended and observe the movement of the children while playing for swallowing or inhalation of any foreign objects, and shared his experience of handling seven other emergencies of foreign bodies in airway and gastro-intestinal tract just during this lock down period.  Dr. Prabhakar B. Kore, MP, Chairman of the KLE Society appreciated the efforts of team of doctors for saving the life of the child.  Dr. M V. Jali, Medical Director and the Staff congratulated the team of Paediatric surgery for the feat achieved, as it was done without delay or hesitation even in these difficult times of the invisible pandemic of coronavirus disease (COVID- 19)