He explained his priorities to people on Friday 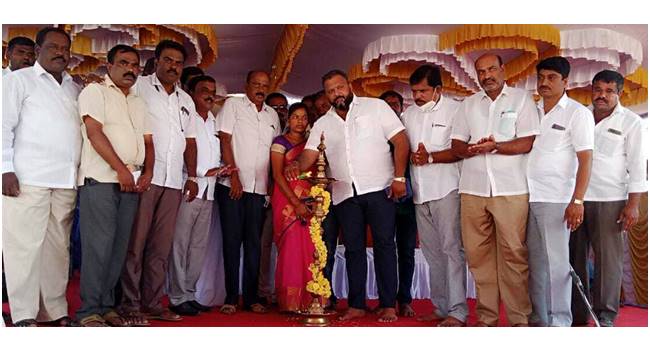 Pragativahini News, Nanjangud (Mysuru): For BJP MLA B Harshavardhan, the prime focus is to provide an irrigation facility in his Nanjungud constituency. In the last 3 years, he has spent Rs. 500 crore on developmental work in his constituency. Of this, Rs 300 cr has gone towards various irrigation works.

He explained his priorities to people on Friday while laying the foundation for reviving a multi-village drinking water supply scheme of the Rural Water Supply & Sanitation Department. This Rs.9-cr project would supply water to Doddakavalande and other 55 villages. It is scheduled to be completed in the next 8 months. “I aim to see greenery in the entire constituency,” he added.

Harshavardhan said that earlier, many had assured him of providing drinking water. Even though they had done ground-breaking ceremonies for the projects, but work was lagging. During the Covid peak time, he said, he continuously followed up on the pending work. There have been some delays in execution, mainly because of a lack of staff following the Covid.

“I aim to complete much more development work in the next one-and-a-half years. My dream is to see greenery in Nanjungud. All preparations have been made to achieve this. At the time, I may have sounded harsh. But I never lag behind in doing public work. I thank all those who cooperated with me in taking forward the water supply scheme, “he added.

Others who spoke on the occasion pointed out that during the BS Yediyurappa regime in 2008, the foundation for the water project was laid. But the work on the ground was not initiated. The BJP government has now given impetus to it.  The Nanjungud constituency had never seen such a huge allocation of funds as seen now, they said.

Harshavardhan said a Detailed Project Report is ready regarding the proposal to fill all tanks in the Kavalande area. The cost would be about Rs 70 crore. “I and Mr. V Srinivas Prasad, MP, had met Chief Minister Basavaraj Bommai during the Dasara festivities in Mysuru. He has reacted positively to our request to approve the project. Soon, we would get administrative approval.

The MLA said the Chief Minister in December would lay the foundation for the Rs. 80 crore Nugu lift irrigation project, for the silver chariot work at Srikanteshwara temple, and for a guest house complex with 75 rooms.