Angadi and district in charge minister Ramesh Jarkiholi were mum to the arguments of Laxmi. 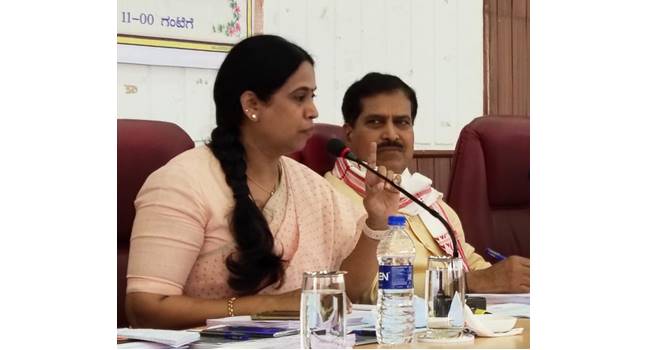 Pragativahini News, Belagavi : In a “Tit for Tat” method, the first-time elected Congress MLA Laxmi Hebbalkar made BJP bigwigs to sweat in a meeting here on Monday.

Railway Minister of State Suresh Angadi, in the Belagavi Taluk Progress Review meeting held at Belagavi Zilla Panchayat,  had critisised Congress and its government in the state saying “Siddharamaiah, just to put put his photograph had started Purified Water supplying Kiosks in the State, of which many were close, this showed how Congress ruled the state”.

Irked over the allegation, Laxmi, representing Belagavi Rural constituency bounced back on BJP and Angadi asking the stock of central government assurance of employing 2 crore jobs every year. Instead generating fresh jobs, employees were removing from the job everyday. Thousands of skilled, unskilled employees,  workers are loosing jobs due to wrong policy of the central government. 46% of the people working in various sectors have lost jobs due to unplanned policies of the Modi government.

As Angadi had said water purified water kiosks were started just to display Siddharamaiah’ pictures, Laxmi said the intention of displaying the picture of PM Modi in every fuel outlets and on gas cylinders. Angadi and district in charge minister Ramesh Jarkiholi were mum to the arguments of Laxmi.

Later, speaking to news persons, Jarkiholi for his silence to Laxmi’s counters said “I don’t wanted to be dirty by throwing stones into the pond of drain water”.