SHRI SURESH ANGADI- A Leader, a Friend, a Legacy 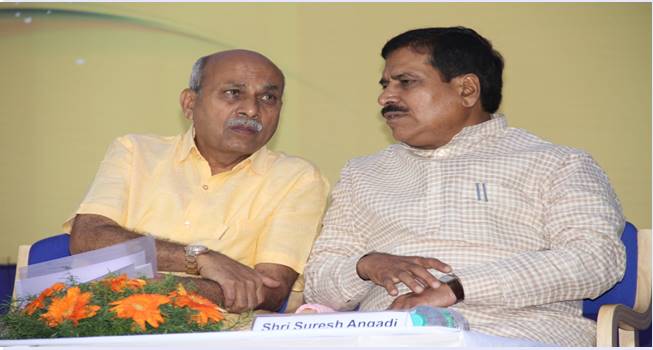 SURESH ANGADI- A Leader, a Friend, a Legacy

Dr. Prabhakar Kore
It is a little less than a week since the passing away of Shri Suresh Angadiji, the Minister of State for Railways, Govt of India and the Member of Parliament, Lok Sabha, from Belagavi. For people in the region and beyond, it is the end of an era that marked relentless efforts, toil and commitment of a wonderful leader who was more than just a politician.

Born in Kanvi Karvinkoppa, a village near Belagavi, Shri Suresh Angadi completed his
matriculation from KLE Society’s G A High School Belagavi. He went on to complete his
graduation from S S Samiti’s Commerce College and education in law from R L Law College,
Belagavi. Subsequently, with the blessings of Late Shri Shivabasava Mahaswamiji of Nagnur
Rudrakshimath, he went on to establish a business venture and was rated among to leading
businessmen in the region.
Having explored the nuances of leadership and community welfare right from his college days, he stepped into the fold of the Bharatiya Janata Party and spent time in consolidating the position of his party from the grassroot levels in the Belagavi region. It was only a matter of time before the BJP leadership took note. He was nominated as the party candidate for the Lok Sabha Elections and received equal support from the people. He was elected as Member of Parliament from Belagavi for four consecutive times since 2004 and never lost an election. In May 2019, he was appointed the Minister of State for Railways and since then spent his days contributing to the expansion of the railway network, enhancing travel safety and modernization of railway infrastructure. His contributions in this regard, especially for Belagavi and Karnataka merit accolades.

Suresh Angadi shared a special relationship with the KLE Society and always supported and appreciated our efforts to transform lives through education, healthcare and research. He graced several KLE Events like the Centenary Celebrations, the inauguration of new institutions and courses and the upgradation of healthcare facilities, including the establishment of the Covid-19 Testing Laboratory. When Honorable Prime Minister Shri Narendra Modiji visited KLE Belagavi, on two occasions, Shri Angadi was present as a member of the KLE family.
Shri Suresh Angadi also contributed immensly to the educational landscape in Belagavi by
establishing institutions engaged in school, collegiate and professional education. His contributions to the Smart City Project and the welfare of the farming community are worth more than a mention.
Today this noble soul has moved on to another realm of existence, however, his short tenure in our midst will forever be remembered. His calm and composed manner, his ability to blend effortlessly with people from all walks of life and his passion for social welfare make him a role model for others to emulate. His passing has left a void that all of us will struggle to fill. Let us all pray for peace to the departed soul and strength to his family as they inherit his inspirational legacy.