Rostrum Diaries – Curating passion with a heart of ART, is an escape space for ARTists 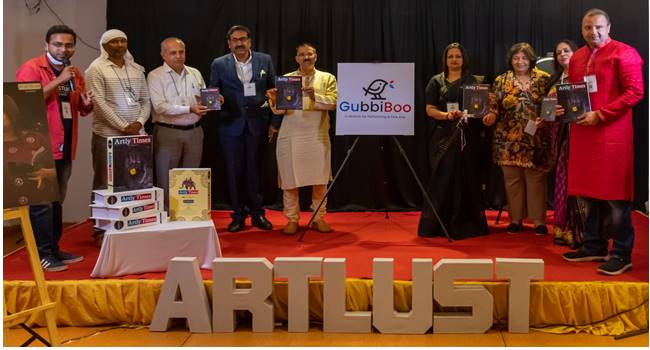 Pragativahini News, Belagavi – This October has finally got Belgaumites, their much needed retreat. Their very own, ROSTRUM DIARIES came back to the city to hunt the talent from every potential corner of Belagavi and yet again, this potentially blessed and talented city of Belagavi rose to a higher level In the word Rostrum meaning – a platform is a community that has grown to an extent to touching more than 15,000 people across many cities all over India. In many of its ventures, this name is also developing its gain internationally.

Founded in 2015, Rostrum Diaries is a community pioneered by a bunch of passionate techies with a heart for art. A stage to nurture, create, cultivate, curate and collaborate with performers, poets, storytellers, narrators, content creators and artists all over the world. The community is all about artist goodwill and promotion of art with technology at hand.
Rostrum Diaries conducted their season 13 at Hotel Eefa on October 2 [Saturday]. The Event was open for all languages with age 16 and above. A total of 30 Participants participated and recited their poetries & Story Telling in English, Hindi, and Kannada & Marathi languages respectively.
2nd of October 2021, Belagavi witnessed the birth of its first organization at Belagavi dedicated to Performing and fine Arts – 𝗚𝘂𝗯𝗯𝗶𝗕𝗼𝗼 a venture for performing and fine arts! An initiative by Rostrum Diaries. The billboard of GubbiBoo was unveiled to officially launch the venture by dignitaries.
GubbiBoo is a venture for on-stage performance and fineart: In addition to teaching self-expression, the performing arts help society as a whole in self-knowledge and understanding. Theatre and the performing arts teach society about itself, hoping to point out the attitudes and mindsets of current society. It can be a tool used to educate people about their current conditions and with this as a main motto we are proud to unveil our new initiative GubbiBoo, a venture for performing and fine arts.
The first product of GubbiBoo, the magazine named Artly Times was also launched during this event.
Artly Times – The brewery of Art – Digital Magazine: Art is the mirror held to the self and the society. It is unique gift to the humans who can express their feelings and emotions through various forms of art. Introducing Belgaum cities first art magazine. Soon to start publication from the house of “Rostrum Diaries”. Here is your opportunity to get noticed on an international platform. Iinterviews of artists, introductions to art forms, insights on performing and fine Arts, search for new talent and display of art work. “Artly Times” is the brewery for all this and much more. The magazine is available in two formats, printed copy (paid) and a digital copy (free). You can read the free version on www.artlytimes.com
Magical Moments – a collection of expressive and emotion poems written and compiled by Mrs. Marie Raghavan was launched by Mrs. Laxmi Tendulkar Dhaul an eminent author and founder, Shoonya Retreat. This is Maree’s debut in the space of published books.

GubbiBoo was launched by  Rajesh Kumar Maurya, Airport Director Belagavi [A huge supporter of art & literature], Mrs. Laxmi Tendulkar Dhaul [Eminent Author & Founder Shoonya Retreat], Dr. Sonali Sarnboat,  Vinod Doddanavar [Bhartesh],  Siddharth Wadennavar,   Maruti Zirali, Mrs.Marie Raghavan [Author & Director, The Formist Group], Dr. Madhav Prabhu, Shri. Ashutosh David, Praveen Kulkarni, Pushkar Ogale, Swatee Jog and Veena Lokur
The best part of this event turned out to be the spectacular management and implementation of safety precautions, keeping the recent times in mind. The organizers made sure that the all the health and safety protocols were followed and precautions were taken care of.
Major keynote of the event
➢ Belagavi’s first venture and the only organization dedicated towards on-stage performance
and fine arts, GubbiBoo Ventures was launched. The organising board i.e. Rostrum Diaries is
now acquired by and merged in this entity.
➢ The first product of GubbiBoo, coming from the House of Rostrum Publications – the magazine named Artly Times was also launched in this event. Read the free version on
www.artlytimes.com. Any artists can get their work featured at free of cost by visiting the link
www.artlytimes.com being verified by the group of experts and the editorial team.

➢ Magical Moments – a collection of expressive and emotion poems written and compiled by
Mrs. Marie Raghavan was launched by Mrs. Laxmi Tendulkar Dhaul.
The Event was supported by Hotel Eefa and we appreciate Mrs. Nilufer Kodachwad the owner for her support for Art and Literature by lending us their venue at no costs.