CALLS FOR COLLABORATIVE RESEARCH TO ENSURE UNINTERRUPTED SUPPLY OF MINERALS 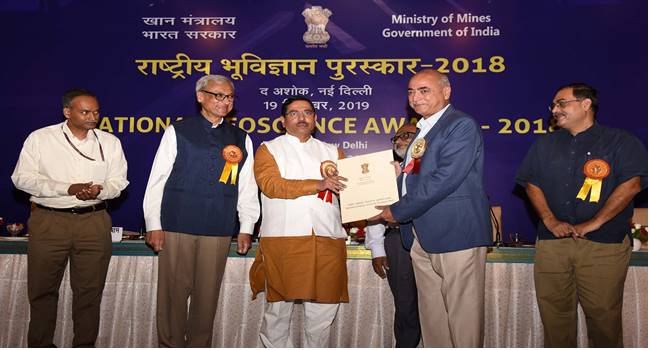 CALLS FOR COLLABORATIVE RESEARCH TO ENSURE UNINTERRUPTED SUPPLY OF MINERALS

Pragativahini News, New Delhi – The National Geo science Awards for the year 2018 for outstanding contributions in the field of geo sciences, mining and allied areas were presented to twenty-two scientists from across the country.

The Minister of Parliamentary Affairs, Coal and Mines, Pralhad Joshi, while conferring the awards said that the need of the hour is to strengthen the synergy between the professional and academic institutions working in field of Geo science.

Prof. Syed Wajih Ahmad Naqvi, Council of Scientific and Industrial Research (CSIR), received the Award for Excellence for his significant global contributions in the field of aquatic biogeochemical research. Dr. Sohini Ganguly, of Goa University was conferred with the Young Scientist Award-2018 for her significant work in the fields of petrology, volcano logy and geochemistry.

Highlighting the demand for the mineral resources in the country, Pralhad Joshi called upon the geo scientific community to come up with innovative means of finding deep seated and concealed mineral resources while causing least ecological disturbance. He said that the Government has brought out the National Mineral Policy 2019 and aims to increase mineral production (in value terms) by 200% in 7 years.

The minister expressed hope that after the completion of National Aero-geophysical Mapping Program covering 27 lakh line km of Obvious Geological Potential by the GSI, the mineral potential zones would be identified leading to actionable mineral blocks.  In the current field season, Geological Survey of India has almost doubled its exploration activity by implementing about 400 mineral exploration projects on various mineral commodities.

Highlighting the trans-formative investor friendly interventions undertaken in the mining sector, Pralhad Joshi said that the MMDR Amendment Act, 2015 has brought in transparency in competitive auction process and grant of mineral concessions. The setting up of National Mineral Exploration Trust (NMET) and District Mineral Foundation (DMF) are steps in this regard, he added. The Government has also set up the Pradhan Mantri Khanij Kshetra Kalyan Yojna (PMKKY) to ensure long-term sustainable livelihoods for the affected people in mining areas, he said.

The Minister of Mines, Pralhad Joshi, at the end of the award ceremony, interacted with the awardees about their current research work and future road map.

Earlier, in the welcome address, Anil Mukim, Secretary, Mines outlined the background of this Award which was initiated way back in 1966 by the Ministry of Mines and has evolved since then with inclusion of new domains of Geo science in the list of awards to recognize the contribution of Geo scientists not only in the field of mineral exploration but also in other disciplines of Geo sciences. Till date, the NGA has been awarded to 820 Geo scientists and engineers from various institutions in the country. Shri S. N. Meshram, Director General, Geological Survey of India (GSI) and other senior officials of the Ministry of Mines and GSI were present on the occasion.